Shrine to Our Victorious Lady of Kozielsk 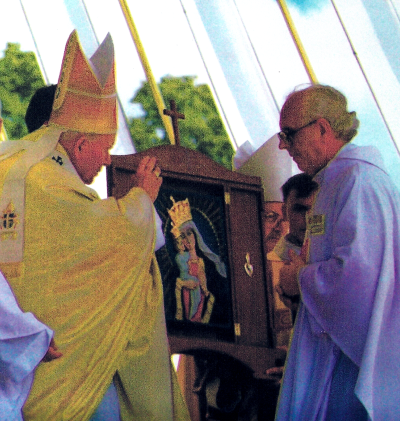 The creation of the original painting of Our Lady of Kozielsk was the initiative of the members of the Marianum Institute and Religious and Knightly Circle which had existed in the north east city of Wilno in the 1930s and had been re-established by Lt.Tadeusz Birecki in the internment camps for Polish soldiers in Lithuania in 1939/1940.

Following the invasion, occupation and annexation of Lithuania by the USSR in July 1940, the interned Polish soldiers were forcibly taken by the Soviets eastwards and imprisoned as POWs (without the protection of the Geneva Convention to which the USSR had not signed up to) in the Kozielsk Camp. This was the very same camp from which in spring 1940, some 4000 Polish POWs professional and reserve officers, had been taken to Katyń and murdered by the NKVD. 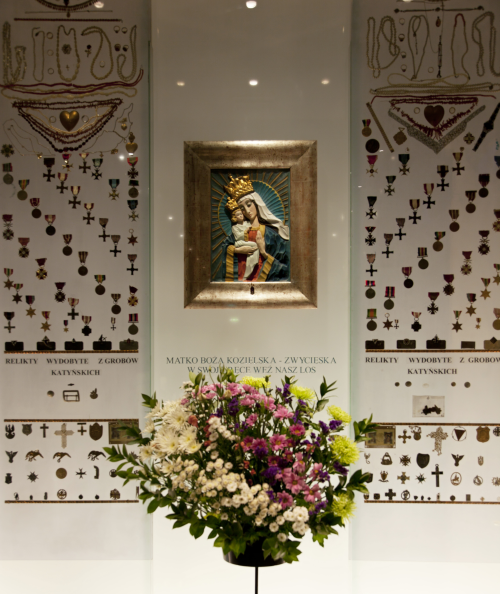 The first sketches for the painting were done by Mikołaj Arciszewski (1908-1943) an sketch artist and journalist. The painting was carried out by Lt.Michał Siemiradzki, an artist and nephew of the famous painter Henryk Siemiradzki (1843-1902). The material for the painting was formed from planks made of lime wood which apparently had come from a desecrated iconostas. It was prepared in the camp carpentry workshop run by Major-General Wacław Przeździecki (1883-1964), a member of the Religious and Knightly Circle. Lt.Mieczysław Gulin made the original crowns for the paintings Madonna and Child from one of the camp pear trees. Thus the first painting of Our Victorious Lady of Kozielsk was created.

Among the new prisoners who arrived at Kozielsk was a young sculptor, Tadeusz Zieliński (1907-1993). It was he who using the remainder of the planks from the iconostas sculpted the relief of Our Victorious Lady of Kozielsk. In the bottom right hand corner on a special small plank he engraved his christian and surname as well as the date 3.5.1941 and on the reverse the words written by Poland’s greatest poet Adam Mickiewicz (1798-1855), „And so You will return us to our Fatherland’s bosom”.

In great secrecy, on Holy Saturday 1941, in the presence of Lt.Birecki and Col.Adam Kosiba, the Siemiradzki painting and the Zieliński wood relief were blessed by Father Nikodem Dubrawka in barrack number 2 of Kozielsk II Camp.

When the prisoners were tansfered to Grazowtz Camp the Zieliński’s sculptered relief wnet with them. It was in this camp that the relief was painted using paints earmarked for Soviet-communist slogans.

The Polish-Soviet Agreement of 30 July 1941, following the USSR becoming a member of the allied coalition after Germany’s attack on the USSR on 22 June 1941 led to the partial release of Polish prisoners. The prisoners of Griazowetz camp became free people, the camp became a transitional camp of the Polish Army which was about to be formed in the USSR as a result of the agreements signed.

On Sunday 24 August 1941, in Grazowetz Camp, the first public mass was said before the Relief of Our Victorious Lady of Kozielsk by Father Franciszek Tyczkowski in the presence of the newly appointed General Officer Commanding Polish Armed Forces inthe USSR, Lt-Gen.Władysław Anders. From that moment the relief became an object of veneration

The relief was brought to Buzuluk the GHQ Polish Forces in the USSR by Col.Adam Kosiba and given to the Army’s chaplain in chief Fr.W.Cieński. The relief accompanied the Polish Army through the Middle and Near East, then throughout the Italian Campaign !944-1945) and then to England. The relief was placed in St.Wilfreds’s Chapel in Brompton Oratory by Fr.Wiktor Judycki the former Chief Chaplain of the 5th Kresowa Infantry division and there it remained until 1963 when it was transfered to the new Polish church of St.Andrew Bobola in Shepherds Bush. There it was placed in a specially designed and built side chapel. In time the walls of the chapel were covered by memorial tablets and the relif was surrounded by many votives including war decorations presented to Our Lady of Kozielsk by veterans and their families interceding and giving thanks for prayers heard. There are also momentoes recovered from the graves at the Katyn Massacre site.

It is hardly surprising that the wood relief of Our Lady of Kozielsk has become the focus of a growing cult and is regarded by many worshipers as a shrine of special importance. The resonance is that much greater that it is located in what is popularly regarded as the Polish Armed Forces’ Garrison Chuch in exile.

Our Victorious Lady of Kozielsk Pray for us.

The above text was prepared by the late Monsignor Bronisław Gostomski on the bases of various published sources and in consultation with Mr.Z.S.Siemaszko.