Relief of Our Victorious Lady of Kozielsk

The creation of the wood relief of Our Victorious Lady of Kozielsk has its origin, among the members of the pre war Marianum Institute and Religious and Knightly Association which had existed in the city of Wilno in north eastern Poland during the 1930s. The Institute and Association was re-established by Lt.Tadeusz Birecki in one of the internment camps for Polish officers in Lithuania, following the defeat of Poland in September 1939 during the first campaign of the Second World War. Following the occupation of Lithuania by the USSR in July 1940 the interned Polish soldiers were taken eastwards by the Soviets and imprisoned in Kozielsk Camp. Their predecessors who had been imprisoned in the same camp from autumn 1939 to spring 1940 were taken to Katyn Forest near Smolensk and murdered by the Soviet secret police, the NKVD and buried in mass graves. 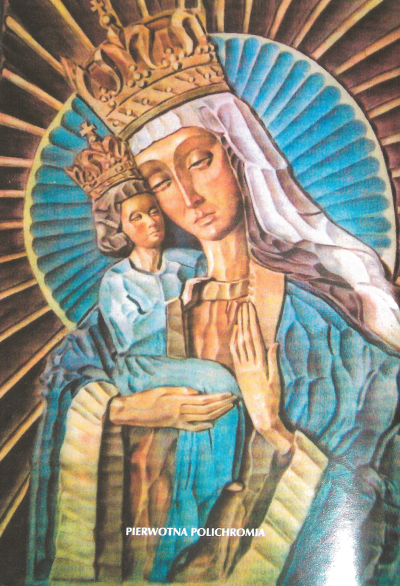 One of the oldest members of the Marianum Institute was Captain Walerian Charkiewicz PhD. It was he, who by chance  discovered a well preserved fresco in the oldest of the Kozielsk complex orthodox churches, representing Our Lady of Żyrowice (near Słonim a town in pre war north eastern Poland) associated with St.Józefat Kuncewicz (c.1580-1623), one of the founders of the Uniate Order of Basilians, murdered in Vitebsk by opponents of the Uniate Church (which recognised the dogma of the Catholic Church and primacy of the Pope whilst retaining the rites of the Orthodox eastern church)

Amongst the prisoners of war held in Kozielsk the cult of Our Lady of Ostra Brama defender of Wilno against the Russians was very much alive. It was not surprising that an initiative to combine the two icons into one was born. The first sketches for such a painting were made by the journalist and sketch artist Mikołaj Arciszewski. The painter Lt.Michał Siemiradzki, a nephew of the renowned artist Henryk Siemiradzki (1843-1902), took upon himself to paint the picture. For the base for the painting he used a plank from a lime tree which apparently had come from a dismantled iconostas. The board was prepared in the camp’s carpentry workshop run by Maj-Gen.Wacław Przeździecki a member of the Religious and Knightly Association of the Marianum Institute. Lt.Mieczysław Gulin prepared the crowns for Our Lady and baby Jesus from a pear tree. Thus was born the first painting of Our Victorious Lady of Kozielsk.

Among those who were brought to the second Kozielsk Camp were those who had been interned in Latvia, among them reserve Cadet Officer Tadeusz Zieliński (1907-1993) a young sculptor. At the request of Lt.Birecki and on the basis of Mikołaj Arciszewski’s sketches, Zieliński sculpted a wood relief of Our Victorious Lady of Kozielsk. It was sculpted from the second part of the iconostas used for the original painting. In the bottom right hand corner he cut out his name and the date 3.5.1941 and on the reverse the words of Poland’s greatest poet, Adam Mickiewicz (1798-1855) “And so by a miracle You will return us to the bosom of our Fatherland”.

In great secrecy, in the presence of Lt.Birecki and Col.Adam Kosiba both icons were blessed by Father Nikodem Dubrawka on Holy Saturday 1941. When the prisoners were being transferred to Griazowetz Camp the wood relief was smuggled in the false bottom of Col.Kosiba’s suitcase. In the new camp, Tadeusz Zieliński managed to add a coloured polychrome using paints earmarked for communist slogans. Meanwhile Siemiradzki’s painting under the care of Cadet Officer Siemiński went north to the Kola Peninsula, from where it finally reached the centres where the Polish Army in the USSR was being formed, originally in Tatishchev where the 5th Infantry Division was being formed. Following the evacuation of the Polish Army to the Middle East and then to Palestine the painting was returned to Lt.Birecki, with the aim that after the war it would be placed in the restored Marianum Institute.

On Sunday 24 August 1941, barely three weeks following the Polish-Soviet Agreement which restored relations between the two countries and called for the creation of a Polish Army in the USSR from the erstwhile prisoners and deportees, the first public holy mass before the wood relief of Our Victorious Lady of Kozielsk was celebrated by Father Franciszek Tyczkowski in the presence of the newly appointed General Officer Commanding-in-Chief Polish Forces in the USSR, General Władysław Anders, himself until recently a prisoner in Moscow’s notorious Lubyanka prison. From that moment the relief became an object of veneration.